Home › Headlines › China and the Dragon Tail of Marx

China and the Dragon Tail of Marx

The dragon tail of Marx’s end-game of overcapacity and finance capital is about to shred China’s fantasy that the state can micro-manage both capitalism and financialization with no contradictions or consequences.

Longtime readers know my one expertise is annoying the entire ideological spectrum in 1,000 words or less. Today is one of those days, so strap on your blood pressure monitor and prepare for full-spectrum annoyance, regardless of your ideological leanings.

Marxism is typically considered discredited outside of a few protected fiefdoms of academia which tend to engage in obscure debates over the labor theory of value and other signifiers of membership in the inner circle of deep Marxist thinkers.

Outside these cloistered academic circles, Marxism is dismissed for two basic reasons:

1. the predicted final crisis and implosion of capitalism did not occur

2. the vaguely outlined post-capitalist incarnation of a stateless worker’s paradise not only failed to materialize, but was used to justify destructive, murderous totalitarian regimes.

But those egregious failures of Marxist theory should not blind us to the value of his critique of capitalism.

After all, he was writing in the first stages of industrialization and global finance (late 19th century), and his failure to detail a scientific socialism beyond capitalism can be chalked up to a mix of naive idealism and a paucity of theoretical models to build on.

1. the consequences of overcapacity and competition

2. the dominance of finance capital over industrial capital

This is not a new dynamic; when I first visited China in 2000, the TV set industry was already suffering from overcapacity/overproduction and a resultant collapse of profits.

What can any enterprise do when competition and overcapacity slash profit margins to near-zero? Slash payrolls and wages. Profit margins are famously razor-thin in most Chinese industries, and despite wages that are a fraction of U.S./E.U. wages, automation of production lines is the only solution to Chinese companies beset by fierce competition and overcapacity in their sector.

Automation only provides a brief competitive advantage, as one’s competitors are busy lowering their input costs by automating production.

Marx understood that the end-game of overcapacity is a reduction of capacity via bankruptcy and the establishment of competition-killing monopolies. This is the stage of collapse that lies just ahead for the majority of Chinese industrial players.

The equally devastating parallel implosion of factory jobs will crush demand. The social safety net in China is threadbare compared to the West; laid off workers get little compensation or retraining; most face a return to rural villages and subsistence incomes from farm work that have dwindled to a few hundred dollars a year as a result of state policies that have made food cheaper for poor urban workers.

If there is any major economy that demonstrates the dominance of finance capitalover industrial capital, it’s China. The entire boom since the global financial meltdown in 2008 has been financed by cheap credit, leverage and speculative lending in an opaque shadow banking sector.

Compare China’s bank assets with those of the U.S., which has an economy of roughly the same size: 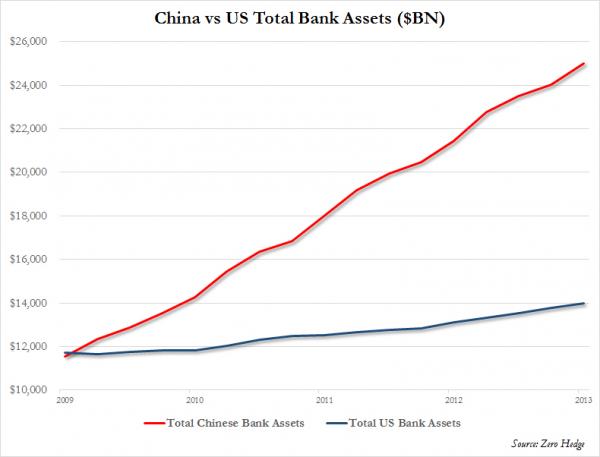 It doesn’t matter whether the banks are owned by the state or not; the net result is the same: massive malinvestment as productive investment is abandoned in favor of speculation.

If any nation is poised to reap the consequences of rampant financialization, it’s China.In the global downturn that’s just starting, China won’t be able to boost capacity as a solution–the economy is already being crushed by overcapacity in virtually every sector.

Marx is about to demolish the fantasy in China that financialization can be controlled by the state. Losses can be covered over and the next expansion of credit is just around the corner. Nice, but credit doesn’t create jobs lost to overproduction, nor does it generate profits, nor does it generate collateral for the next round of shadow banking speculation.

What Marx did not foresee is the critical role of the state in enforcing private monopolies and the predations of financialization. While Marx understood the parasitic nature of Monopoly Capitalism, he did not anticipate the State’s partnering with Cartel/Crony Capitalism. In effect, the Chinese State is now so dependent on financialization that it stripmines the citizenry to protect the financial sector from the consequences of their business model (excessive credit, leverage, fraud, embezzlement and the misrepresentation of risk). But the Chinese State doesn’t merely enable the predation of its crony financiers; it also stripmines the citizenry to fund its own expansion into every nook and cranny of civil society.

The dragon tail of Marx’s end-game of overcapacity and finance capital is about to shred China’s fantasy that the state can micro-manage both capitalism and financialization with no contradictions or consequences. “Dragon Seeks path. Dragon whips his tail.” The dragon of capitalism isn’t as easy to control as bureaucrats expect.

2 comments on “China and the Dragon Tail of Marx”