OK, so our collective eyes start glazing over when we see Marx and Orwell in the subject line, but refill your beverage and stay with me on this. We’re going to explore the premise that what’s called “socialism”–yes, Scandinavian-style socialism and its variants–is really nothing more than finance-capital state-cartel elitism that has done a better job of co-opting its debt-serfs than its state-cartel “capitalist” cronies.

We have to start with the question “what is socialism”? The standard definition is: a political and economic theory of social organization that advocates that the means of production, distribution, and exchange should be owned or regulated by the community as a whole.

In practice, the community as a whole is the state. Either the state owns a controlling interest in the enterprise, or it controls the surplus (profits), labor rules, etc. via taxation and regulation.

The problem with equating the community with the state is the community is a completely different order from the centralized state, which is operated and controlled by a self-serving clerisy class that institutionalizes benefiting the few at the expense of the many.

The more accurate definition of socialism is: the means of production are owned and controlled by those who produce the goods and services.

Marx wrote a great many things in his career, and those who view his writings as scripture will argue endlessly over various interpretations and passages, much like people argue over the Bible.

In my view, Marx was a political-economy philosopher, not a demi-god, and so he retained the right to be completely wrong about some things, to contradict himself, to have missed important second-order effects, to have gotten some things half-right, etc., and most importantly, not to have been clairvoyant about the trajectory of history and capitalism, which he correctly identified as disruptively dynamic, i.e. everything solid melts into air.

One of the things Marx got right was the alienation of the producer/ worker from the output of his/her labor. The alienation is not just a loss of ownership; it’s also a loss of agency and a psychological alienation from the entire mode of production.

The workers’ alienation from the output of their labor doesn’t vanish just because the state owns the means of production; rather, the “capitalist” elite is replaced by a political elite and a state-clerisy managerial class.

“Socialism” is simply another flavor of state-cartel capitalism; Orwell would be proud of all the simulacrum self-serving “socialists” who have managed to enrich themselves at the expense of those actually producing goods and services.

Let’s boil it down to its essence: if the producers don’t directly own/control the output of their labor, it’s capitalism, not socialism. State ownership/ control is nothing but the state-cartel coin turned over.

The only truly socialist system would be comprised of worker-owned collectives and co-ops, and privately owned and operated small enterprises.

In a truly socialist system, global corporations would pay such high entry fees and taxes that they could not compete on price against local worker-owned collectives/ co-ops.

In a truly socialist system, state functionaries would be banned from accepting bribes, campaign contributions, seats on philantro-capitalist foundations, corporations, etc., and barred from taking jobs in corporations after leaving state employment.

In state-cartel economies, “socialist” or otherwise, the system optimizes corporate profits, influence and agency. In a truly socialist system, worker-owned collectives/ co-ops and small business are optimized and corporations are de-optimized.

The only way state-cartel “socialist” economies can prop up their vast spending is by inflating even vaster debt and housing bubbles via financialization— the exact same mechanism used in so-called “capitalist” economies to benefit the few at the expense of the many.

So-called “socialist” nations from China to Scandinavia are inflating monumental bubbles of debt to keep their delusions of sustainability aloft. I have covered China’s unprecedented expansion of debt many times; Acting Man does an admirable job of covering Scandinavian Bubbles in Overdrive.

Danish household debt to GDP is among the highest in the world: what’s “socialist” about debt bubbles? 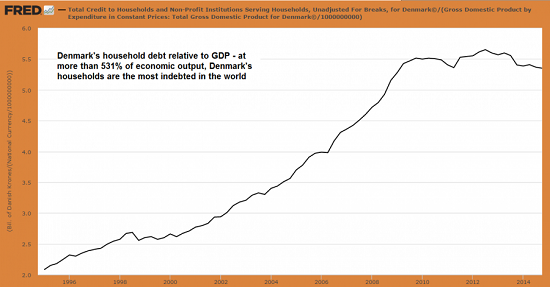 “Socialist” countries like Denmark are practicing extreme financial repression: what is “socialist” about negative interest rates? 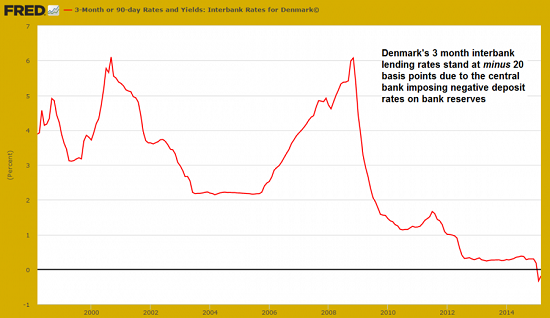 Why does “socialist” Sweden need to inflate one of the world’s most precarious housing bubbles? If “socialism” requires extremes of financialization to stay afloat– sorry folks, it isn’t socialism. 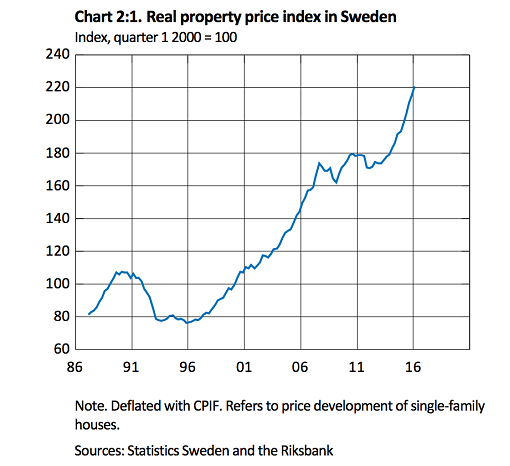 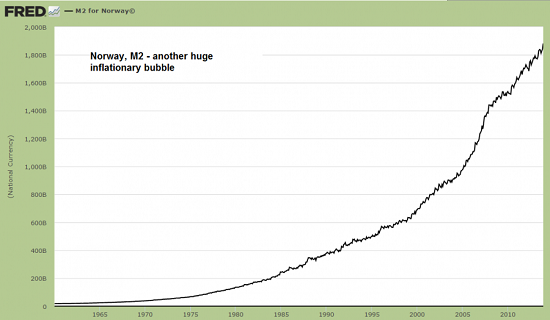 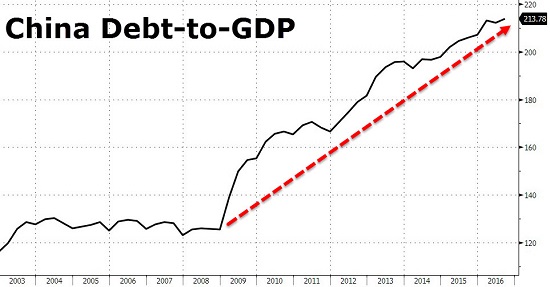 As Marx anticipated, finance-capital would come to dominate industrial capital and the state. What we see in these charts is finance-capital running to extremes to keep the state-cartel version of capitalism from imploding.

When “socialist” states have to impose finance-capital extremes that even exceed the financialization of nominally capitalist economies, it gives the lie to their claims of “socialism.” The simulacrum “socialist” economies will implode with even greater force than the nominally capitalist economies, as a result of the same dynamic: state-cartel financialization is intrinsically unstable and unsustainable.