Home › Headlines › The Hidden-in-Plain-Sight Mechanism of the Super-Wealthy: Money-Laundering 2.0

The Hidden-in-Plain-Sight Mechanism of the Super-Wealthy: Money-Laundering 2.0

We all know the rich are getting richer, and the super-rich are getting super-richer. This reality is illustrated in the chart of income gains, the vast majority of which have flowed to the top .01%–not the top 1%, or the top .1% — to the very tippy top of the wealth-power pyramid:

Though all sorts of reasons have been offered to explain this trend–I’ve described the mechanisms of financialization here for years–two that don’t attract much mainstream media attention are money laundering and control fraud, i.e. changing the rules of what’s legal so what was illegal yesterday is legal today–presto-magico, illegally skimmed wealth is now “legal.”

Conventional money laundering works by shifting ill-gotten gains into legitimate banks and/or assets. Ill-gotten gains can be laundered quite easily by buying homes or businesses (in the U.S., Europe, etc.) with cash. The home or enterprises can then be sold and the net is now legit.

Another kind of money laundering opens shell accounts in U.S. states with no income tax or offshore tax havens and then transfers intellectual property or other income-producing assets into the shell accounts.

As JD pointed out in his email to me, control fraud is a profoundly insightful concept presented by author William K. Black (Wikipedia), the essence of which is that those with control/ power in centralized institutions can defraud the institutions and their users/citizenry by modifying the rules of what’s legal/allowable, and do so legally, i.e. within the letter of the law if not the intent of the law.

Black is the author of the book The Best Way to Rob a Bank is to Own One: How Corporate Executives and Politicians Looted the S&L Industry.

Control fraud ranges from juicing the financials of companies to “legally” stripmining entire nations. In my view, borrowing billions of dollars to buy back shares in a company and thereby boosting the value of the stock options held by top management is an excellent example of fully legal control fraud: the top managers essentially transfer enormous wealth from the enterprise to their private pockets, under the guise of “building shareholder value.”

In other words, control fraud ranges from masking fraud to bringing fraud (however shakily) into the circle of quasi-compliance to fully legal fraud (i.e. much of what enriched the few at the expense of the many in 2002-2008 housing/mortgage bubble.)

The ultimate form of control fraud is our auction-to-the-highest-bidder “democracy” in which wealth casts the only votes that count. Just transfer enough wealth to the political class via campiagn contributions, “donations” to their foundations, etc., and then have a juicy targeted tax break inserted into a complex legislative bill.

The structure of JD’s money laundering 2.0 has been exposed by The Panama Papers and the Paradise Papers. If you’re not familar with the enormous offshore tax avoidance industry, here are a few sources to start with:

The Paradise Papers: A new mass data leak, this time from an elite law firm with elite clients, shows how deeply offshoring is embedded in the global financial system.

How Corporations and the Wealthy Avoid Taxes (NYT)
An estimated $8.7 trillion, 11.5 percent of the entire world’s G.D.P., is held offshore by ultrawealthy households in a handful of tax shelters, and most of it isn’t being reported to the relevant tax authorities

Why we are shining a light on the world of tax havens again (The Guardian)
After explosive leaks from an offshore firm last year, others in the sector insisted it was a bad apple. Now that claim can be tested.

How to stop the super-rich looting our wealth: make it illegal (The Guardian)
The Paradise Papers expose a business model that lets the few asset-strip the many. Governments have powerful tools to stop this – but do they have the will?

The Hidden Wealth of Nations: The Scourge of Tax Havens (book) 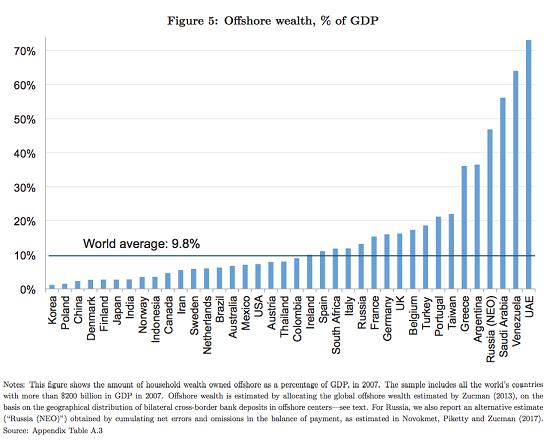 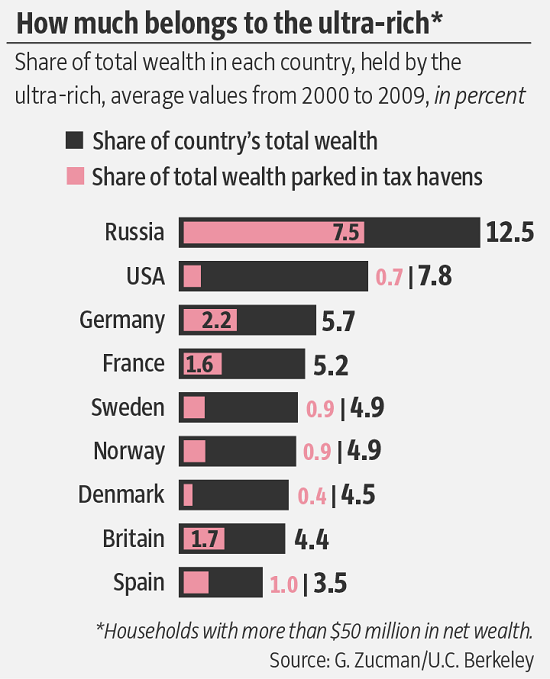 Just remember two things: JD’s definition of money laundering 2.0: “making sure that ‘legal’ fortunes are not taxed and cannot be clawed back”

there is only one elite class at the top of the wealth-power pyramid: Financial and political power are two sides of one coin.

One comment on “The Hidden-in-Plain-Sight Mechanism of the Super-Wealthy: Money-Laundering 2.0”