Lesson of the S-Curve: Doing More of What’s Failed Will Fail Spectacularly

I often refer to the S-Curve because Nature so often tracks this curve of ignition, rapid expansion, stagnation and decline.

The dynamic in play is diminishing returns: the yield on the policy that worked so splendidly at first diminishes with time.

Credit offers a cogent real-world example. When credit becomes available in a credit-starved economy, it generates a rapid, sustained expansion as credit-worthy borrowers borrow and spend on new productive capacity, consumer goods, housing, etc., all of which further drives expansion.

But once credit has saturated the entire economy, the only pool of borrowers left are uncreditworthy (i.e. at risk of default), and the only projects left unfunded by credit are laden with risk.

END_OF_DOCUMENT_TOKEN_TO_BE_REPLACED

There is a grand, majestic tragedy in the inevitable collapse of once-thriving states and empires: it all seemed so permanent at its peak, so godlike in its power, and then slowly but surely, too many grandiose, unrealistic promises were made to too many elites and constituencies, and then as growth decays to stagnation, the only way to maintain the status quo is to appear to meet all the promises by creating money out of thin air, i.e. debauching the currency.

This political expediency works most wonderfully for a time: people don’t realize the silver content of their coinage is being cut to near-zero, or there’s nothing holding up the value of their currency but trickery and vague allusions to past glory.

Trust in the state/empire’s currency suddenly collapses in a phase shift: all seems well until the moment the avalanche sweeps it all away.

It’s a simple progression: during the permanent-growth-is-our-birthright phase of self-reinforcing virtuous cycles, when everything is expanding rapidly–credit, resources, jobs, capital, profits, state tax revenues, etc.–promises are made to elites and constituencies that look easy to meet as the economy is projected to expand rapidly essentially forever.

END_OF_DOCUMENT_TOKEN_TO_BE_REPLACED

Here’s The Problem: The Pie Is Shrinking

Scrape away the churn and distraction and the problem is simple: the pie of prosperity is shrinking, and the “fixes” are failing. The status quo arrangement is based on the endless expansion of “growth” and debt, which is the monetary fuel of more, more, more of everything: money, energy, resources, goods, services, jobs, wealth and income, all of which make up the elixir of prosperity.

Prosperity is shorthand for a positive return on investment (ROI), a.k.a. primary surplus. Prosperity is the result of there being a surplus which can be distributed after capital, resources and labor are put to work.

The higher the return on investment, the more surplus there is to distribute.When the surplus is bountiful, there’s enough to go around for everyone to feel that life is getting better.

But all systems eventually track an S-Curve of rapid growth, maturation and depletion/decline, and surpluses diminish: the pie stops expanding and starts shrinking. There’s less to go around, and suddenly the political squabbling intensifies as every elite and every constituency seeks to preserve their slice of the pie at the expense of others.

END_OF_DOCUMENT_TOKEN_TO_BE_REPLACED

Natural and human systems tend to go through stages of expansion, stagnation and decline that follow what’s known as the S-Curve. The dynamic isn’t difficult to understand: an unfilled ecological niche is suddenly open due to a new adaptation; a bacteria evolves to exploit a new host, etc. Expansion is rapid until the niche is fully occupied, and then growth matures and stagnates; the low-hanging fruit has all been picked, and it’s much more costly to reach what little is left.

Human economies starved of capital, credit, access to markets and freedom are akin to unexploited ecological niches. Lacking capital, credit and the freedom to innovate, experiment and advance, economies wallow in a self-reinforcing stagnation.

Should capital, credit, access to markets and freedom become available, the economic expansion can be breath-taking. This is the basic script of postwar Japan and the Asian Tiger economies: economies with either minimal or war-damaged infrastructure, limited capital/credit and stifling status quo power structures that limited the freedom of the populace to access markets and innovations were suddenly open to credit, markets and innovation.

END_OF_DOCUMENT_TOKEN_TO_BE_REPLACED

While many fear a war between the nuclear powers or the breakdown of civil order, I tend to think the Crisis of 2023-26 is more likely to be financial in nature.

War and civil breakdown are certainly common enough in history, global/nuclear war has been avoided in recent history, largely because wars are typically launched by those who reckon they can win the war. Launching a nuclear strike against a nation with the ability to launch a counterstrike (from submarines, for example, and missiles that survived the first strike) guarantees the destruction of whatever concentrations of population and assets the attacker may have.

The breakdown of civil order has not occurred in developed-world nations for quite some time, as central states can marshal military forces to restore order and issue / borrow money to buy the compliance of the restive populace.

Financial crises, in contrast, remain a constant feature of the modern era, and developed-world nations are perhaps even more vulnerable to financial disorder than developing nations.

As I’ve often noted, systems tend to follow an S-Curve of rapid expansion followed by slower growth during maturity and culminating in stagnation, decline or collapse.

END_OF_DOCUMENT_TOKEN_TO_BE_REPLACED

Tagged with: Inflation, QE for the people, S-Curve

I’ve been pondering the excellent 1964 history of the Southern Song Dynasty’s capital of Hangzhou, Daily Life in China on the Eve of the Mongol Invasion, 1250-1276 by Jacques Gernet, in light of the Chinese government’s unprecedented “Social Credit Score” system, which I addressed in Kafka’s Nightmare Emerges: China’s “Social Credit Score”.

The scope of this surveillance is so broad and pervasive that it borders on science fiction: a recent Western visitor noted that train passengers hear an automated warning on certain lines, in Mandarin and English, that their compliance with regulations will be observed and may be punished via a poor social score.

END_OF_DOCUMENT_TOKEN_TO_BE_REPLACED

Understanding the Global Recession of 2019

2019 is shaping up to be the year in which all the policies that worked in the past will no longer work. As we all know, the Global Financial Meltdown / recession of 2008-09 was halted by the coordinated policies of the major central banks, which lowered interest rates to near-zero, bought trillions of dollars of bonds and iffy assets such as mortgage-backed securities, and issued unlimited lines of credit to insolvent banks, i.e. unlimited liquidity.

Central governments which could do so went on a borrowing / spending binge to boost demand in their economies, and pursued other policies designed to bring demand forward, i.e. incentivize households to buy today what they’d planned to buy in the future.

This vast flood of low-cost credit and liquidity encouraged corporations to borrow money and use it to buy back their stocks, boosting per-share earnings and sending stocks higher for a decade.

The success of these policies has created a dangerous confidence that they’ll work in the next global recession, currently scheduled for 2019. But policies follow the S-Curve of expansion, maturity and decline just like the rest of human endeavor: the next time around, these policies will be doing more of what’s failed.

END_OF_DOCUMENT_TOKEN_TO_BE_REPLACED

The Next Financial Crisis Is Right on Schedule (2019)

After 10 years of unprecedented goosing, some of the real economy is finally overheating: costs are heating up, unemployment is at historic lows, small business optimism is high, and so on–all classic indicators that the top of this cycle is in.

Financial assets have been goosed to record highs in the everything bubble.Buy the dip has worked in stocks, bonds and real estate–what’s not to like?

Beneath the surface, the frantic goosing has planted seeds of financial crisis which have sprouted and are about to blossom with devastating effect. There are two related systems-level concepts which illuminate the coming crisis: the S-Curve and non-linear effects.

The S-Curve (illustrated below) is visible in both natural and human systems.The boost phase of rapid growth/adoption is followed by a linear phase of maturity in which growth/adoption slows as the dynamic has reached into the far corners of the audience / market: everybody already caught the cold, bought Apple stock, etc.

END_OF_DOCUMENT_TOKEN_TO_BE_REPLACED

July 4th is an appropriate day to borrow Winston Churchill’s the gathering storm to describe the existential crisis that will envelope America within the next decade. There is no single cause of the gathering storm; in complex systems, dynamics feed back into one another, and the sum of destabilizing disorder is greater than a simple sum of its parts.

Causal factors can be roughly broken into two categories: systemic and social/economic. The central illusion of those who focus solely on social, political and economic issues as the sources of destabilization is that tweaking the parameters of the status quo is all that’s needed to right the ship: if only Trump were impeached, if only GDP hits 4% annual growth rate, if only the Federal Reserve started controlling the price of bat guano, etc., etc., etc.

The unwelcome reality is the systemic issues cannot be reversed with policy tweaks or shuffling those at the top of a crumbling centralized order. The systemic problems arise from the structures of centralization and monopoly capital, theinstitutionalization of perverse incentives and the depletion of natural capital: soil, water, fossil fuels, etc.

Regardless of their ideological labels, centralized socio-economic systems follow an S-Curve of rapid expansion during a “boost phase,” a period of stable expansion (maturity) and then a period of stagnation and decline as the system’s participants do more of what’s failed, as they cannot accept that what worked so well in the past no longer works.

A successful model traps those within it; escape becomes impossible. That’s the lesson of the S-Curve:

END_OF_DOCUMENT_TOKEN_TO_BE_REPLACED

Have We Reached Peak NFL?

OK, I get it: pro football is so popular because it’s one of the last refuges of modern life that hasn’t been ruined by politics. Oops, scratch that. But we shouldn’t pin the decline of pro football’s popularity (as measured by viewership) solely on player protests, as the decline predates the recent politicization.

As this chart shows, viewership has been sliding for years across the entire demographic spectrum: 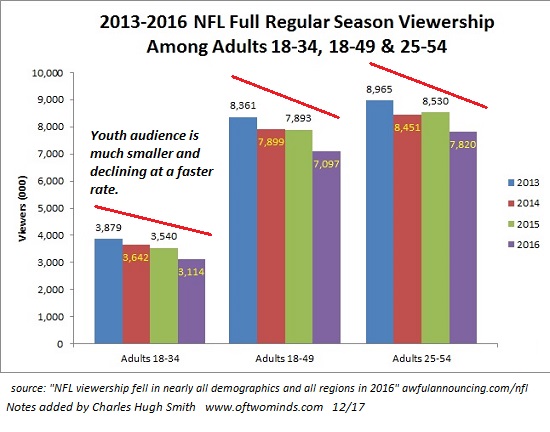 END_OF_DOCUMENT_TOKEN_TO_BE_REPLACED

Why We’re Fragmenting: The Status Quo Is Disintegrating

I confess to being amused by the mainstream media’s implicit view that everything would be peachy if only Trump wasn’t president. Memo to MSM: the nation is fragmenting for reasons that have nothing to do with who’s president, or indeed, which party is the majority in Congress, who sits on the Supreme Court, or any other facet of governance.

The nation is fracturing and fragmenting because the Status Quo is failing the majority of the citizenry. The protected few are reaping all the benefits of the Status Quo, at the expense of the unprotected many.

As I have outlined many times, this unsustainable asymmetry is the only possible outcome of our socio-economic system, which is dominated by these forces:

END_OF_DOCUMENT_TOKEN_TO_BE_REPLACED

Take a quick glance at these charts of the Federal Reserve balance sheet and bank credit in the U.S. Notice what happened to bank credit after the Fed “tapered” and stopped expanding its balance sheet? 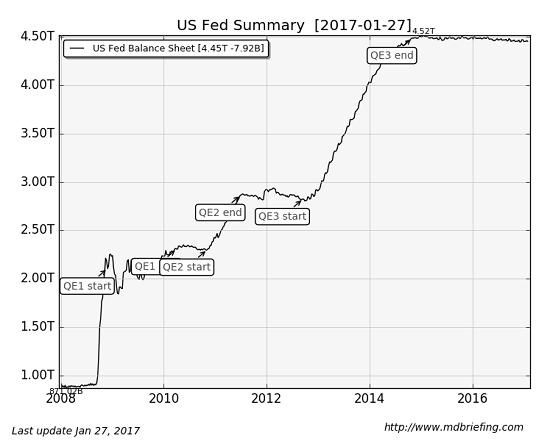