In what future generations will likely see as a major, potentially catastrophic blunder of monetary policy, the West and particularly the City of London continues to hemorrhage huge volumes of gold which is flowing Eastwards to Singapore, India and China from London via Switzerland.

“Gold exports to China from the refining hub of Switzerland almost doubled to 46.4 metric tons in March”, up from 23.6 tonnes in February” according toBloomberg. India’s gold imports from Switzerland doubled to 72.5 tonnes in the same period. END_OF_DOCUMENT_TOKEN_TO_BE_REPLACED

Russia and surprisingly the Netherlands were the largest central bank buyers in December – accumulating a significant 30.34 tonnes between them as currency wars intensify.

Demand for gold as a diversification and monetary asset continues to be very robust and central banks remain net buyers of gold which should be supportive of prices. The Netherlands, which has the ninth-biggest gold reserves,  raised its bullion holdings for the first time in 16 years. It added  9.61 tonnes to bring total gold reserves to 622.08 tonnes.

Russia raised its gold reserves for a ninth straight month in December as the country continued its multi month gold buying spree, adding to the fifth-biggest gold holdings in the world, data from the IMF showed yesterday.

Russia continues to dollar cost average into gold and increased its bullion holdings by another hefty 20.73 tonnes to 1,208.23 tonnes in December. END_OF_DOCUMENT_TOKEN_TO_BE_REPLACED

The pattern of central bank covering the debt is clear.  The lesson is that central banks can apply paper patches to the failed banks, and buy more time, then repeat the process on the next failed bank event. No limit to their bank patches seems to be in force.   The banker cabal can continue endlessly since their patches are based on paper solutions, fiat paper money spew, and they control the paper output. They are the masters of the House of Paper.
The paper mache solutions can continue in a seemingly endless manner, but not in the Gold market.
The intervention and suppression in the Gold market is finite.   It requires Gold bullion, the physical ingot bars, in order to execute the perpetuated interference and alteration to this financial niche market.
The manipulation is finite, and it is coming to an end.
When the Shanghai shock comes, ALL THE PAPER GOLD STRUCTURES WILL FALL, all the FOREX derivatives will collapse, & all the control rooms will go into panic mode.

Click here for the Latest Hat Trick Letter The Shanghai Shock to Shatter the Gold Market:

The LAST Move Before Checkmate…

When the Shanghai exchange runs dry out of silver, they will use the event as a legitimate checkmate excuse to revalue both silver and gold.  This ties in with Dr. Jim Willies “GRAND GOLD SHOCK EVENT” prediction.  China’s physical gold holdings will go up in value all while they rake in their paper shorts on the other side.  This will cause shockwaves to the gold, silver and the FOREX derivative markets!
Without the Shanghai physical drain on silver supplying the mints, the COMEX and LBMA would have defaulted by now.  This is no accident.  China created the loophole like a Trojan horse targeting the Achilles’ heel of the financial system.  Silver is the sacrificial pawn.
Wall Street took the arbitraged silver bait and it’s almost time to back up the truck and go ALL-IN!  Gold and silver are about to slingshot out of the station!  The game ends when Shanghai runs out of real silver!
A PLANNED CHECKMATE IS NOW IN FULL VIEW.

Click here for more on the planned Shanghai Checkmate:

Harvey Organ: Shanghai Drained of Silver, Bullion Banks Are About to Attack the COMEX!

Click here for the SD Weekly Metals & Markets With special guest Harvey Organ on why the Bullion Banks are about to ATTACK the COMEX:

With increased regulatory scrutiny on the London gold and silver fixings and what looks like a defensive attempt by the LBMA in London to protect their proprietary gold and silver price discovery auctions via the recently introduced CME/Thomson platform for silver and probably soon to be introduced similar CME platform for gold, it will be interesting to see how the Chinese government’s pro-gold strategy pans out. 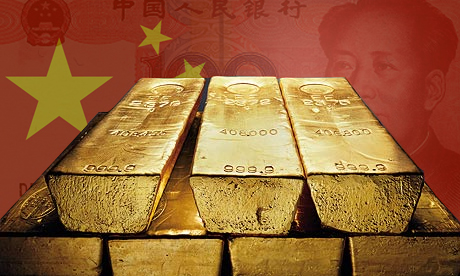 We may soon see global gold hub wars between London and New York on the one hand and the increasingly powerful eastern hubs of Singapore, Shanghai and Beijing on the other.

END_OF_DOCUMENT_TOKEN_TO_BE_REPLACED

The sell off was greeted by Chinese buyers as Chinese premiums edged up to just over $1 an ounce on the Shanghai Gold Exchange (SGE). Gold price drops this year have led to a marked increase in demand for gold as seen in very large increases in ETF holdings (See chart – Orange is Gold, Purple is absolute change in gold ETF holdings). The smart money in Asia, the West and globally continues to use price dips as an opportunity to allocate to gold.

END_OF_DOCUMENT_TOKEN_TO_BE_REPLACED

JIM SINCLAIR: ULTIMATE BAIL-IN IS COMING- IS IT TIME TO BANK WITH THE BRICS?

Legendary gold expert Jim Sinclair has significantly reduced his public commentary over the past 6 months, reserving most of his advice for those willing to attend Sinclair’s financial meetings across the country- likely due to the fact that many new PM investors lam-blasted Sinclair over his incorrect short term call in 2013 that support in gold would hold at $1600.
Sinclair, who in addition to his role as CEO of Tanzanian Royalty Exploration, is also the Executive Chairman of the new Singapore Precious Metals Exchange, was recently the Keynote Speaker at the 2014 Hong Kong Mines & Money conference.
Sinclair discussed how to avoid the coming Western financial system bail-in, the role of gold in the coming crisis, & banking with the BRICS.
We highly suggest that readers check their emotions and biases at the door, and view the entire MUST WATCH Keynote address from the world’s foremost big-picture expert on gold & the financial crisis:

While many precious metals blogs and investors have proclaimed an imminent COMEX default since 2008, we have long maintained that the COMEX is more likely to fade into irrelevance than to outright default on gold or silver bullion as physical Asian demand would facilitate the development of physical exchanges in the east.
It appears that the CME decision makers have seen the light and agree with us, as Reuters reports this morning that the CME plans to launch a physically settled gold futures exchange…in Asia.

Click here for more on the CME’s plans to launch a physically settled gold exchanges in Asia:

Silver futures in Shanghai surged by 6% – the  daily exchange limit. Silver for June delivery in Shanghai climbed to 4,440 yuan/kg, highest price for a most active contract since October 31. In London, silver surged another 2.3% today to $21.99/oz and is headed for the longest run of gains since at least 1968. It is now up 11.3% year to date and is, as expected, again outperforming gold. END_OF_DOCUMENT_TOKEN_TO_BE_REPLACED

PM Fund Manager: 57 Tons of Gold Drained From Shanghai Vaults in Past Week!

On this week’s SD Weekly Metals & Markets Dave Kranzler (Dave in Denver) joins the Doc and Eric Dubin for a discussion on real estate, the economy,  & the gold and silver markets. This week’s show covers:

Chinese demand may once again stem the decline in gold prices. Chinese buyers eagerly scooped up gold at bargain prices overnight after the 4% price fall. Gold volumes for the benchmark cash contract on the Shanghai Gold Exchange (SGE), China’s biggest spot bullion market, climbed to a 10 week high as lower prices led to increased buying. The volume for bullion of 99.99% purity climbed to 19,775 kilograms yesterday, the biggest since October 8, from 13,673 kilograms the previous day. END_OF_DOCUMENT_TOKEN_TO_BE_REPLACED